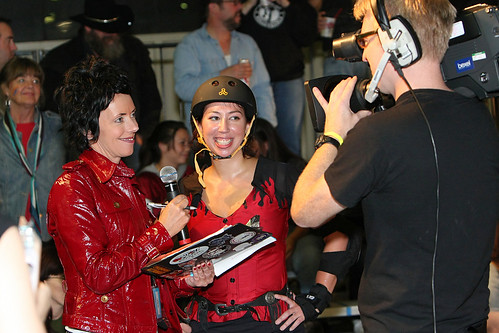 Last Saturday night, our championship game was filmed for Comcast On Demand. Afterward I did a short interview with Queen Mum and we discussed the game while I looked in to the camera awkwardly. Our team lost but only by a few points, and we closed a 50 point deficit in the second period! We also discussed my transition between Bay Area and Rat City, and differences I've noticed between the leagues. The most notable distinction for me is the focus on speed and endurance that I see on Rat City. Whether or not this equates to a winning strategy we'll see in the next couple of months in the Western Regionals and then (hopefully) WFTDA Nationals.

The On Demand filming is a trial and I hope it is well viewed. Seeing flat track derby on cable and in homes across the country is exciting to say the least!